The Myth of the Church Divorce Rate

Have you heard the oft quoted Barna study that reportedly says, “Just like the overall population, half of all marriages in the church end in divorce”? 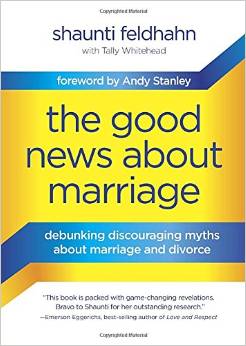 If you have heard and believed that “stat”, then like most of us you have bought into a myth.

Shaunti Feldhaun (a master of studying statistics and studies of statistics) beautifully debunks the myth – as well as many other depressing marriage myths – in her easy to read and thoroughly researched book (with lots of notes on the stats, endnotes directing you to the original studies, and statistical explanations): The Good News About Marriage: Debunking Discouraging Myths About Marriage and Divorce.

Ready for some mythbusting?  Here’s the truth that has been lost about marriage and the church (quotes are from The Good News About Marriage):

I won’t go into the details of these studies (for that you will need to buy the book which expounds on these studies and many more), but I will give you some highlights:

These studies, and many more presented in the book, thoroughly bust the myth that “the rate of divorce in the church is 50 percent, just like the rest of the world.”

The Good News About Marriage chapter on faith and marriage goes onto describe the benefits of not only going to church together on a regular basis but also describes the major benefits of a couple praying together and mutually aiming to put Christ at the center of their lives and their marriage.  But for a look at those stats, you will have to buy the book yourself.

In case the above good news isn’t enough to help encourage a couple to start attending church regularly and incorporating healthy biblical practices in their daily home life, here is a little something from Les & Leslie Parrott’s Saving Your Marriage Before it Starts: Seven Questions to Ask Before – And After – You Marry:

As strange as it may sound, there is a strong link in marriage between prayer and sex.  For one thing, frequency of prayer is a more powerful predictor of marital satisfaction than frequency of sexual intimacy. But get this: Married couples who pray together are 90 percent more likely to report higher satisfaction with their sex life than couples who do not pray together” (pp 150-151).