“Boundaries are personal property lines that define who you are and who you are not, and influence all areas of your life.”
(Boundaries: When to Say Yes, When to Say No to Take Control of Your Life by Dr. Henry Cloud and Dr. John Townsend, front flap, 1992). 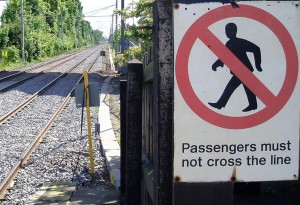 When we think about those who have trouble maintaining their own boundaries, we tend to think of those people who can’t seem to say “no”.

But these aren’t the only types of “boundary crossers”.  Here are a few categories of those who have boundary problems:

1. Compliants: Saying “Yes” to the Bad

Compliants tend to give into and go along with the needs and demands of others.  A hallmark illustration is pretending to like the same things as another person simply to “get along” and avoid conflict.  Compliants tend to be like chameleons, blending into their social surroundings so that you do not really know who they really are as an individual.  A dangerous pattern among compliants is the inability to say “no” to bad things and even not recognizing evil.  “Many compliant people realize too late that they’re in a dangerous or abusive relationship.  Their spiritual and emotional “radar” is broken” (p 51).  Often driving the inability to establish healthy boundaries is fear – usually irrational fear.

2. Avoidants: Saying “No” to the Good

Avoidants have the “inability to ask for help, to recognize one’s own needs, to let others in.  Avoidants withdraw when they are in need; they do not ask for the support of others” (p 52).  The main problem in regards to boundaries with avoidants is that they are hiding themselves not only from unhealthy situations but also from healthy and safe relationships – often when the need the latter the most.  Avoidants tend to see their struggles and wants as something shameful, thus self-justifying their hiding behind their walls from help.

3. Compliant Avoidants: Saying “Yes” to the Bad and “No” to the Good

4. Controllers: Not Respecting Others’ Boundaries

“Controllers can’t respect others’ limits.  They resist taking responsibility for their own lives, so they need to control others…They tend to project responsibility for their lives onto others” (p 54).  These people are often seen as manipulative and bullies as they seek to get others to carry their responsibilities, burdens, and personal boundaries (see the previous post).  “If they’r honest, controllers rarely feel loved…Because in their heart of hearts, they know that the only reason people spend time with them is because they are pulling the strings” (p 57).

Aggressive controllers make it obvious that they do not and will not respect the boundaries of others – sometimes resorting to verbal or physical violence.  Manipulative controllers try to talk others out of keeping their boundaries and when confronted will often “deny their desires to control others…[and] brush aside their own self-centeredness” (p 55).

5. Nonresponsives: Not Hearing the Needs of Others

Nonresponsives demonstrate the inability to respond to the needs of others, within the context of healthy boundaries.  They tend to “have a critical spirit toward others’ needs” (due to a hatred of their own needs) and/or are “those who are so absorbed in their own desires and needs they exclude others (a form of narcissim)” (p 58).

These boundary crossers “see others as responsible for their struggles and are on the lookout for someone to take care of them.  They gravitate towards someone with blurry boundaries, who will naturally take on too many responsibilities in the relationship and won’t complain about it” (p 59).

If you would like help in taking responsibility for your own boundary crossing &/or help in dealing with others who are crossing boundaries, please call CornerStone Family Services at 614-459.3003.